Fablab Saigon – a quick review on our achievement

You are here:
Makerspace 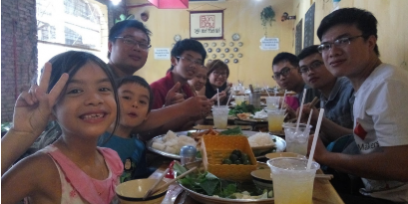 It has been 2 years and a half since our Fablab Saigon established. It’s not long enough to validate the success, but it’s not too short for us to feel fulfilled when we look back the past time.

We write this post to review the whole journey we have been through. There was bad and good time, but the reality that we still exist and are going to go further on our hard way, which is to promote the Makers movement as a new way to think consumption, economy and society, is our biggest achievement. It make us strongly believe that we can commit our mission:  INNOVATION LITERACY THROUGH DIGITAL FABRICATION.

Here are the important marks on our development since we were born:

Mar. 2014: Participated in Saigon TechCamp: IoT and demo of the FabCooker

12/2014: Took part in Saigon Barcamp, Projection of Makers, a documentary on the Maker movement

May 2015: Participated in FAN2 in Taiwan, Maker Faire Taipei

Sept 2015: Had Nam Son Laser become our lasercutter partner and loaned a laser machine to us

Oct. 2015: Participated in OIP Startup and innovation conference in Taipei

Oct. 2015: Participated in KLESF in Malaysia

Do those marks impress you like they impressed and inspired us to keep going and growing?

We also want to thank you for your contribution and support for Fablab Saigon. The Maker community can’t be this big and connected without your active participation.

Please keep doing so and VISIT OUR MAKERSPACE and CAFE whenever you need a home or a feeling of belonging to a close community!!!